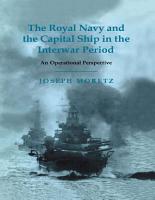 Book Description
Joseph Moretz's innovative work focuses on what battleships actually did in the inter-war years and what its designed war role in fact was. In doing so, the book tells us much about British naval policy and planning of the time. br This book reviews the role of the battleship in the Royal Navy during the 1919-39 period. It offers fresh insights into why the capital ship was deemed central to British naval planning even late in that era. br Drawing heavily on official Admiralty records and private papers of leading officers, the author examines the navy's operational experience and the evolution of its tactical doctrine during the interwar period. He argues that operational experience, combined with assumptions about the nature of a future naval war, were more important in keeping the battleship afloat than conservatism in Navy. br The author studies the many strategic threats facing the Royal Navy at this time and the differing approaches the Navy adopted to counter these, using the battleship. He concludes that previous historians, in neglecting the tactical and operational experience of the Royal Navy, and with full knowledge of the World War II, have painted a distorted picture of the place of the battleship between the two world wars.